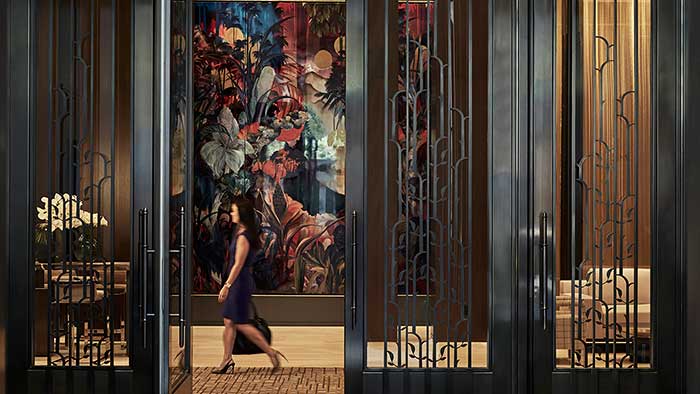 Among its 189 light-filled guest rooms and suites, seven specialty suites are proving to be particularly popular.

The Royal Suite is the pinnacle of cosmopolitan style, spanning an entire side of the 24th floor with views in three directions.  Several of the corner Gotham Suites have a rarity in New York hotels – walk out terraces on the 23rd and 24th floors.  Finally, there are the Tribeca Suites with apartment-like layouts and amenities that feel far more like a home than a hotel.

Designed by acclaimed New York architect Robert A.M. Stern, the all-new 82 storey building was envisioned to blend seamlessly into the skyline, as though it had always been there.  Indeed, with 157 private residences occupying the upper floors, the ambiance is distinctly residential. 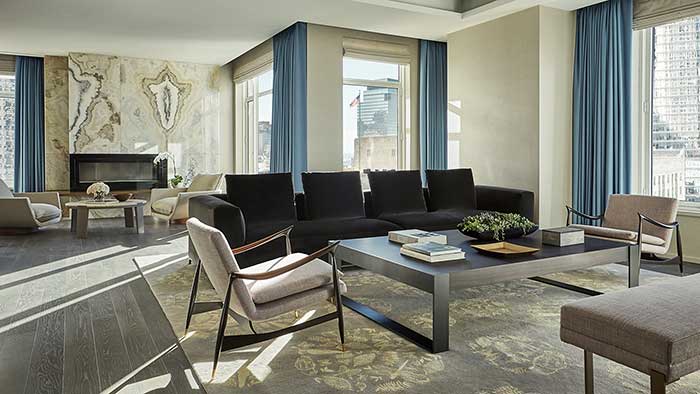 Art-filled interiors are by Yabu Pushelberg, the Soho and Toronto-based designers known for their fresh aesthetic and exacting attention to detail, coupled with Four Seasons dedication to creating environments that anticipate every guest need, including a desire for flexible space they can make their own while in residence.

Inspired by the gracious apartments of the city’s elite, the 2,400 square foot (223 square metre) Royal Suite spans the entire east side of the 24th floor.  Residents and their guests enter through a formal foyer, with living spaces to the left.

A corner living room has two seating areas, a blue onyx fireplace and a custom oak bar topped with imported stone from India.  Off the ten-seat dining room, a large butler’s pantry with its own staff entrance is perfect for family meals, or entertaining clients.

Down the gallery-like hall, a separate library/media room can host private screenings or game nights, and there’s also an executive-style office and a powder room. 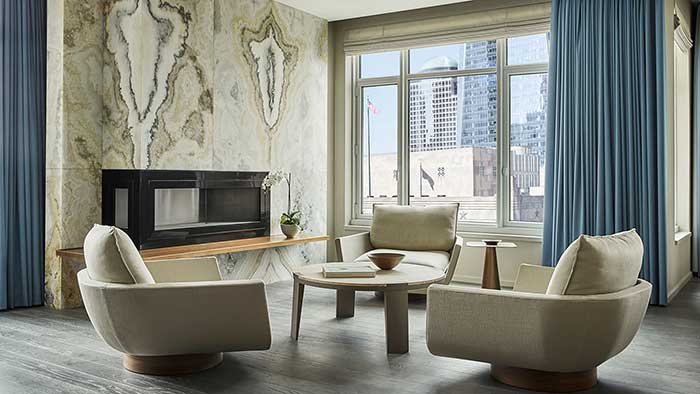 At the far end is the lavish master suite, with a corner bedroom featuring silk wallcoverings, walk-in dressing area and five-piece bath.  The space can be separated from the rest of the Royal Suite and even has its own entrance for complete privacy. Additional bedrooms can be connected to the suite for families or those travelling with staff.

The two Tribeca Suites offer an atypical layout across 1,220 square feet (113 square metres) on the 23rd floor.  The master suite is self contained, with sofa by the window and private bath.

The living area, which opens onto an outdoor terrace, is decorated in the manner of a chic Manhattan apartment, easily transforming from a cosy romantic retreat to a family room, or a sophisticated setting to welcome friends or associates for cocktails.  A separate dining room can become a spacious work area or seat six people for a meal, and a well-equipped walk-in pantry makes entertaining effortless.

The coveted Gotham Suites – there are just four of them – occupy corner positions on the 23rd and 24th floors with glittering city views in two directions. 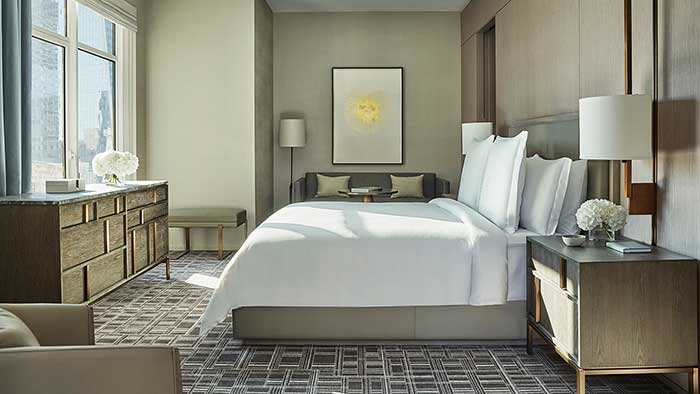 Throughout the Hotel: Accommodations Features and Guest Services

All suites, including the 15 Hudson Suites and 6 Four Seasons Executive Suites as well as all room accommodations, incorporate numerous thoughtful details.  At-one’s-fingertips technologies include multiple power and USB outlets throughout, large tv screens that can connect to personal devices, in-mirror televisions above the bathroom vanity, in-room iPads for accessing Hotel services, and complimentary Wi-Fi.

The lighting design is equally intuitive – lights are dimmable to suit one’s mood, and task lighting at bedside allows for comfortable reading or document review.

The fully-customisable Four Seasons Bed lets guests choose their preferred firmness, and a pillow menu is available.  Dressing areas have custom-designed three-way mirrors, while bathrooms offer both a free-standing oval bathtub and a separate shower. Complimentary toiletries are by Florentine perfumer Lorenzo Villoresi. 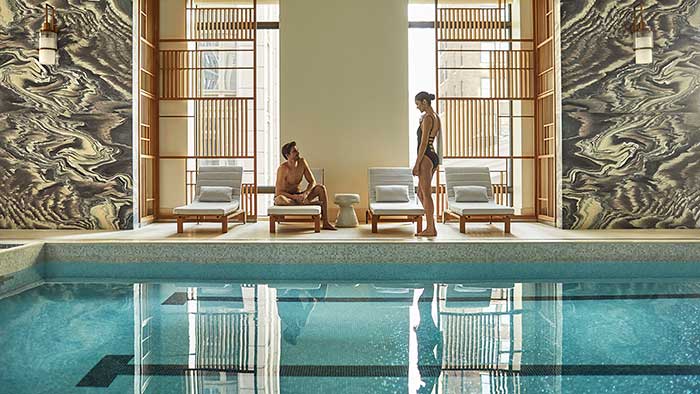 This achievement acknowledges Four Seasons Hotel New York Downtown as one of North America’s most luxurious accommodations and a premier establishment within the hospitality industry. Fewer than half a percent of the nearly 28,000 properties rated by AAA achieve this prestigious distinction.

Four Seasons Hotel New York Downtown is part of a select group representing the upper echelon of the hospitality industry in North America. Just 120 hotels and 63 restaurants made the AAA Five Diamond lists for 2017. 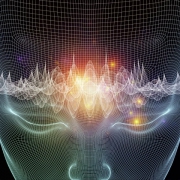 Jaz in the City – neues Themen-Hotel in Dubai 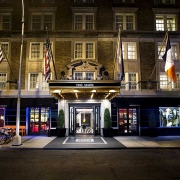 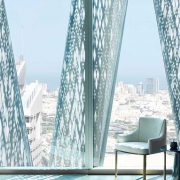 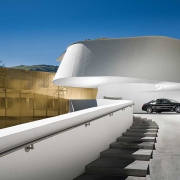